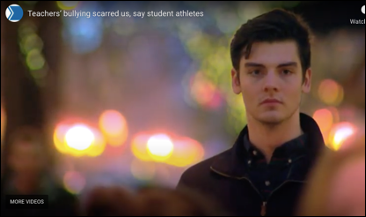 Gifts that come with being a whistleblower are sanity, clarity, exposure of enablers, who re-victimize children and coverup deadly abuse. In an article about “Conscientious Objectors” (aka whistleblowers) in the workplace, British Social Sciences prof John Solas describes the behaviour that creates the conditions for corruption. He explains:

“Bad leaders would not be able to realize their ambitions without the support of dedicated, opportunistic, docile, or indifferent followers. Their success is assured by the complicity of the silent majority. Going along with villainy certainly resolves the dilemma of self-sacrifice.”

I reported the bad leaders [the Headmaster, Board, Chaplain, Commissioner for Teacher Regulation, lawyers hired by the school] to the Ombudsman’s Office who is tasked to ensure government agencies are conducting themselves properly. I’m sorry to report not even the Ombudsman’s Office acted to address the failure and manipulation of the Commissioner for Teacher Regulation. Even when it became a life and death issue, they did not act effectively to protect child-victims.

It is impossible to fight government agencies who are complicit in the abuses they are meant to halt.

That was a very painful lesson for me to learn on the whistleblower’s path. But as I told you, there are gifts that come from being a whistleblower and I feel that Kyle Beach is already experiencing them. I’m not sure his speaking up is only a self-sacrifice. It’s more like self-determination. He has put himself now on the healing path, the path of truth, the refusal to feel worthless, and ashamed.

He has put aside doubt and replaced it with clarity. This is one of the gifts that comes with being a whistleblower.

He is no longer “John Doe.” No. He is Kyle Beach who was assaulted by a coach and then re-victimized by an organization he was giving his best self to, and even risking his life for. They failed him. When our son was asked by investigative reporters why he spoke up, he said he wanted other athletes to know they did not have to suffer abuse in silence. He wanted to act as a role-model for refusing to be subjected to daily abuse just to pursue the sport you love.

The front page story in The Toronto Star and on CTV’s W5 (part one / part two) added my son’s voice to an athlete revolt that just keeps getting bigger and bigger.

I feel like one of the main catalysts was the Mike Rice story that blew up two years earlier at Rutgers University. As captured on video, as was the abuse done by one of my son’s coaches by The Toronto Star and W5, Rice’s abuse was so similar in gesture it was uncanny. Our son’s coach was filmed at a game so he wasn’t yelling or muttering his “obscenities” on camera. In contrast, the video of Rice was from practices. Rice was hurling homophobic slurs, swearing, and being enraged and threatening.

But while the teachers were protected by the Commissioner for Teacher Regulation, who said the fault lay with the students for being “too sensitive,” and for listening to the teachers’ “obscenities,” Mike Rice was fired. The Athletic Director who had failed to fire him previously also lost his job. His assistant coach who mimicked his abusive conduct also stepped down. The legal team that said his conduct did not require immediate firing also lost their position. The president of Rutgers had to fight to save his job and barely hung on.

The media effectively held these bad leaders to account, but not here in Canada and it is why I continue to study abuse and how it flourishes and how it can be stopped.

All over the world since the time of publication of our son’s teachers in 2015, media exposé after media exposé of abuse has dominated the sports world. I don’t know if there’s a direct correlation between our story and what’s getting unpacked as systemic abuse throughout sports, but what amazes me in reading these stories is that they are so shockingly similar. They all follow the abuser and enabler textbook. And Solas’ description of enablers in management positions, who fail to stop abuse and actually facilitate it, also can apply to athletes on the team.

The abusive individual is like a puppet master, whether he’s the abuser or the leader who enables his abuse.

While our son was being abused day in day out at practices and games, he set himself one goal: “not to let them break me.”

When he spoke up to national news outlets about the abuse, and he was only one of two athletes who risked a great deal to attach their testimony to their names, he chose the active whistleblower path. He made a conscious decision to define himself against those who were abusive, along with their dedicated, opportunistic, docile, or indifferent followers. In a discussion with a university advisor who asked him what he learned from the experience of being abused and reporting it, he replied “I’ve learned that I have courage.” Like Kyle Beach, our son’s choosing the whistleblower path was not only an act of self-sacrifice; it was an act of self-determination and it gave him sanity and clarity. What he did have to sacrifice was playing the sport he loved and that was incredibly painful.