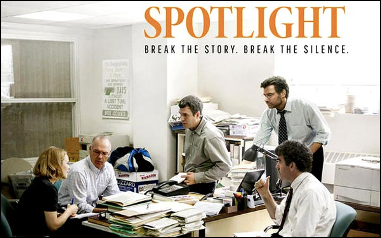 Hopefully you’ve seen the film Spotlight about relentless journalists exposing rampant child abuse in the Catholic Churches of Boston. My key take-away from the film is that being a whistleblower requires a lot of grit and commitment. If you want to make actual change, whistleblowers have to stay the course.

This line is spoken by Stanley Tucci in the role of Boston lawyer Mitchell Garabadien: “If it takes a village to raise a child, it takes a village to abuse one.” As most know, abuse in Catholic churches, or Catholic run institutions like the abhorrent residential schools for Indigenous children in Canada, occurs all over the globe and thus is emblematic of how the village of adults work together to abuse children.

What Spotlight hones in on are *not* the perpetrators of abuse; they train their intense light on the “army of enablers.”

This is exactly what TSN investigative reporter Rick Westhead is doing with Blackhawks administrators. And I hope you felt a shot of adrenaline when you learned that Kyle Beach no longer wants his name hidden as “John Doe” in the lawsuit. Why would he? He’s got nothing to be ashamed about. He’s got nothing to hide. It’s the administrators who are struggling to get their story straight when speaking to media. Award-winning journalists like Rob Cribb in our story and Rick Westhead in Kyle Beach’s story expose institutional complicity in the abuse of victims.

They expose the “army of enablers” required to normalize child abuse.

In Spotlight which was based on a true story, the award-winning team of Boston investigative journalists never gave up despite multiple coverups and roadblocks. Ultimately, they examined how lawyers hired by the church paid hush-money to child victims. They examined how Bishops and Cardinals would move abusive priests on to other unsuspecting victims. This is exactly what the Vancouver Whitecaps did with abuser Bob Birarda. This is exactly what the Blackhawks did with Kyle Beach’s abuser Brad Aldrich. In Spotlight, the journalists even dared to look at those in their own profession who failed to follow up on victim reports and tell the story of abuse which could have had the power to save further victims.

Although people, and experts even like to put abuse into silos and see it as somehow distinct depending on the context, the fact is all kinds of “villages” enable the same kind of abuse whether it’s in the workplace (as has blown up with #MeToo) or in Boy Scouts of America and Canada (again huge amount of media exposure), abuse in music and dance and theatre (examined in the award-winning movies Whiplash and Black Swan), or in gymnastics around the world (most notoriously USA Gymnastics with Dr. Larry Nassar) or in all other sports. Sports Illustrated has to keep writing articles about coaching abuse as it rocks university campuses and ruins athletes’ mental and physical health. The list is endless.

The only thing that doesn’t change is the actual abuse and the enablers’ strategies to cover it up.

It’s remarkable when you study it. The only thing that changes are the names, places, and surrounding activities. The abusive behaviors and the way those in power cover them up for years or even decades at a time are pretty much identical. Much of the time I have spent on my whistleblower’s journey is wondering just where the textbook is that educates leaders, administrators, media, lawyers, government officials on how to keep abuse hidden and how to enable abuse for years, rather than stop it.

I found this endless going in circles with the same old story to be one of the most daunting aspects of being a whistleblower.

Once you’ve had the blinders ripped from your eyes, you find that with every page you turn, every newspaper you pick up, every abuse story you follow on the internet, every email or call asking you to act as a consultant in an abuse case, the village of enablers insists that this time it’s different, and this time they’re going to figure out how this ever could have happened, and they’re going to protect the vulnerable because there is nothing, and I mean nothing, more important to them than victim safety.

Unfortunately, when you’ve been on the whistleblower journey for ten years and you hear these words, you don’t feel a thrill or a shiver of excitement that now real change is going to happen and kids are going to be able to pursue their academics, sports, clubs, religion, entry into the workplace with respect and safety. In fact, you feel depressed by all this big village talk because you know it’s part of the pattern. It always happens after the media exposé and then surprisingly quickly, it’s business as usual. This is what has been striking to watch with USA Gymnastics.

The “army of enablers” did the big “whoops, we’re so sorry that happened” and “now let’s get back to us leading the status quo.”

The athlete-survivors have been exposing this return to “abuse-normal” for years now. Sometimes money changes hands and the main perpetrator goes to jail (or simply on to another job after being paid out, as if your contract protects your salary, but not those you victimized) even when your abuse victim dies like 19 year old football player Jordan McNair.

Whistleblowers who want to make actual change have to stay the course.

The village is highly adept at apologizing and saying it will never happen again and making a big show of bandaid solutions like writing a “Code of Conduct” or doing research or launching investigations or Royal Commissions. The amount of ink and paper dedicated to these reports and the number of shelves that hold them as they gather dust is amazing. It begs the question: why do we still have rampant, systemic child abuse across all aspects of society with all of these grand gestures and handsomely funded reports?

It begs the question: why do the evidently weak laws never change?

Why is the enabling of abuse not a crime like other complicit acts are? Why are children not educated about adult abuse and educated about ways to protect themselves?

If you really want to make positive change, then the whistleblower role isn’t a big public gesture followed by a return to your own happy life. No. It’s a long drawn out battle to make change.

First and foremost, you must learn to tune out the village because it wants you to give up. It wants you to feel weak and hopeless and as if you are hurting others (namely those you reported on). Every day, no matter how rejected you are in your career, how the financial wolf is at the door, how people believe you’re a bad person, how you must face that nothing’s really changed and abuse flourishes, how you are exhausted, you must find the energy and commitment to keep going.

It’s that marathon moment when your body is screaming at you to stop and you just keep putting one foot in front of the other.

From the day the first student reported being abused in the spring of 2012 at our son’s school until my book The Bullied Brain: Heal Your Scars and Restore Your Health is published in spring of 2022, I will have been on the whistleblower path for ten years. Am I stopping? No. Not until child abuse is no longer a normalized part of the society of developed nations.

As an effective whistleblower, you must keep exposing the enabling of abuse regardless of how much you hurt or how much they make your life a living hell.

The village has a remarkable number of tried and true tricks to destroy you. If you’re going to save kids you need to survive, and ultimately outwit what Dorothy Suskind identifies as a range of villagers from “bad followers” to “evildoers.” As noted, law professor Amos Guiora has made an eloquent and powerful argument for holding the enablers in the village criminally accountable for their institutional complicity in abuse. I highly recommend reading his book Armies of Enablers. It’s one of the few times I have actually seen a glimmer of hope in our vast village that enables child abuse.